I mostly saw score updates at the airport during the game, but based on that I'm guessing that this was the best looking thing about the game: 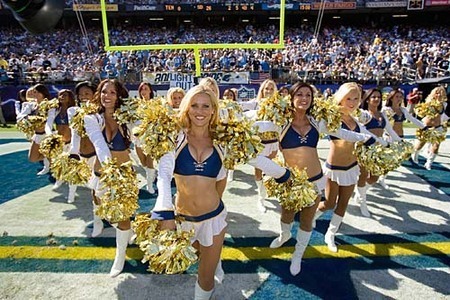 First lets give full credit to the Dolphins; after going 1-15 last year they have hung L's on two good teams in their last two outings.  I really expected this Charger team to be able to move against their secondary; but this is clearly a different group from last years gang who couldn't pass straight.

From the score I can believe that the defense looked credible, but Rivers and the offense were totally stymied.  Beyond that I expect there was a lack of intensity in the first half, and a final attempt to make up for it in the second half that came up short against a Miami squad that in the end wanted it more.  The up side of this Bolts team is that it definitely has the talent to win; the down side is that it doesn't appear to match the will and desire of opposing teams.

On deck is a good litmus game for the Bolts.  The Patriots are without quarterback Tom Brady, but they have still managed to go 2-1.  With Denver winning this week, the Chargers are once again going to need help to win the division; perhaps even to make the playoffs.  Right now the difference between the Chargers and Denver is that desire to finish the close games; the Broncos didn't destroy Tampa Bay, but made the plays at the end of the game to put it away.  The Chargers have not made those plays against the Panthers, Denver or the Dolphins.  I still love this team and the talent on it, but they have to show that killer instinct if they want to make their mark in this league.