This was a game it looked like the Chargers should win going in; no doubt it was a bad sign when it opened with a power outage.  With a banged up secondary and their best pass rusher out; the Bills looked like they should be vulnerable.  The Chargers had their chances but ultimately the offense would self-destruct with a series of excruciating turn overs and the defense didn't hold up against a terrific performance by Trent Edwards coming off a concussion. 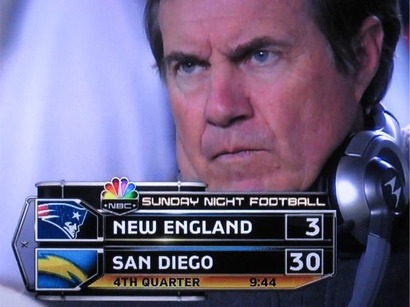 When he was good, he was very good, but when he was bad it was ugly.  In the first half he fumbled, leading to seven points on the short field for Buffalo.  The interception in the fourth quarter shouldn't have been thrown.  Rivers seemed to assume with the mismatch in height and assume he can fire into triple coverage and have his man come away with the ball.  The final nail in the coffin was his fumble on the last drive, but the game was out of reach by then.  The defense played poorly, but Rivers put more pressure on them by committing three turn overs.

Watching Malcolm Floyd come in and just tear up defenses is great to see.  This is a team that is deep at wide receiver.  Both Vincent Jackson and Malcolm Floyd played well; I would have much rather seen more balls going there way and much less rushing from first down.

LT was well contained in the first half.  He did have some nifty runs in the fourth quarter as the game wore on, but then came the interception and his day was done.  14 carries for 41 yards; and without a 31 yard reverse by Vincent Jackson, we wouldn't have even made the paltry 70 yards we had.  Sproles still looks hampered by his injury to me.  Tolbert didn't see any catches or touches, I assume the ankle is still hampering him.

Let the chips fall; the run blocking was totally wanting.  On that final drive they were unable to hold of the rush from a depleted Bills defense; some of the blame goes on Rivers but he wasn't getting enough time back there.  McNeil went out at one point, they did have some nice runs late in the fourth quarter to the right side?  Anybody besides me think maybe they should try starting Shelton on the right side?

Gates had a few nice catches and in the fourth quarter Manumaleuna made a terrific block to go along with an important eight yard reception.  A. Gates still seems off stride, or maybe we just don't have enough plays to get it to him regularly; he has not been the threat he was last year.

Jamal looked good; the Bills running game was largely contained, holding the Bills to just over 100 yards.  Williams is playing with great energy, I'm seeing him making plays down field on occasion now.  Even with that; there was virtually no pressure on passing downs.  The Cardinals ate this Bills Offensive line alive; but somehow even with their starting center out Trent Edwards had all day to pull apart the Bolt secondary.  I didn't notice Ian Smith, it doesn't look like he any tackles.  Did anyone see him get in?

No pressure, there was reasonable run defense.  Marques Harris was completely taken out on one running play.  Runs did seem to turn the corner occasionally, I didn't like seeing that.  There is some hope that with Jyles Tucker the rush will get better.  To some degree this is a tough grade, as the defensive scheme really hampered the way this defense performed in my opinion.

Quentin Jammer got hammered on the big running TD by Buffalo; and he also gave up a TD through the air on a fine catch by Lee Evans.  Both corners seemed to play mostly in zone again, and with the lack of a rush some of these short passes can't entirely be hung on them.  With an 83% completion rate; you have to go away from the zone when you aren't getting pressure.  That we persisted until Buffalo's final drive was completely frustrating.

Weddle I thought played well, but Hart missed a tackle; allowing a painful third down conversion.  His pass defense also was also suspect today.  It looked like the corners didn't get consistent help to the inside when needed.

How can the coaching be so good against the Patriots and so bad here?  Cottrell went with a soft zone and sure enough Buffalo just ate us up.  It almost can't be called pass defense with an 80+ percent success rate, it's more like pass acquiescence.  While the Chargers did stop the run, that ends up being pretty worthless when you still let the Bills move the ball up the field at a measured pace.  We are bending but not getting the turnovers that you must see with this type of strategy.  It is important after hitting yourself in the head with a hammer that you recognize it hurts and stop, that didn't happen.  I have stayed largely neutral on the calls for Cottrells end as the defensive coordinator, but this game left me convinced that he is not the man for the job.

On offense I have fewer complaints; I would like to see less runs on first down, get some yards first and then go with a draw play.  The running game is obviously out of synch, let them get some rhythum as a changeup.  The turnovers this game are on Rivers I think, the Chargers did move the ball down field effectively; but just didn't get the ball enough and self-destructed with the turnovers.