Share All sharing options for: Chargers vs. Dolphins - Defense

Miami runs a 3-4 defense that has been inconsistent this season.  While they were narrowly beaten by the Jets, the Cardinals throttled them, racking up 31 points.  Next week against a deBradied NE, they were stifling allowing just 13 points and less than 250 total yards.  Kendell Langford, taken in the third round of this years draft has played well at left end racking up eight tackles and two sacks, there has been some premature talk of defensive rookie of the year for him.  The Dolphins nose tackle is Jason Ferguson, the Big Tuna brought him over from the Cowboys.  Not as heavy as Jamal, he is supposedly strong enough to command the double team.  On the other side is Vonnie Holiday and Phillip Merling who have 16 tackles and a sack between them; those are good numbers out of a 3-4. 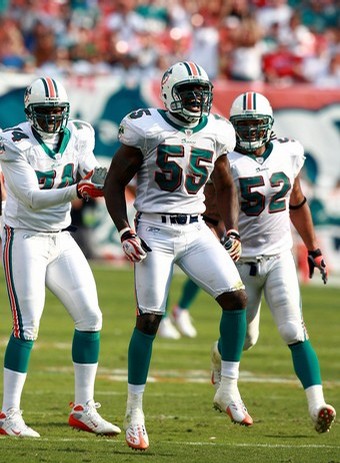 Joey Porter came up with three sacks against New England.

The Chief sack threat in the LBs is Joey Porter who has picked up four sacks this year, three in one game.  Channing Crowder on the ILB position is a quick tackler; the rest of the linebacking corps is average at best.  Overall this looks like a defense that is fairly good against the run, but can be had in the passing game.

At Strong Safety is Yeremiah Bell who has a reputation as a fierce hitter with good coverage skills.  Free Safety, Chris Crocker was lit up so badly by the Cardinals that he was replaced by Renaldo Hill.  This Dolphin defense likes to blitz from a lot of different positions, and will take big risks to get pressure.  Against the Cardinals this also led to big plays, deep plays could pay off big against Miami.  You have to like the gambling instincts of these Dolphin coaches, after a 1-15 season last year they can hardly go wrong even if they get snake bit some along the way.

For once my take is born out by the Football Outsider stats which show the Miami defense being much better than average against the run, but much worse against pretty much every passing target except the running back.  They appear to do particularly poorly against the #2 receiver; that may be different now with Renaldo at safety.