The Patriots offensive line had real problems keeping the pressure off Tom Brady in the Super Bowl last year.  This year they have given up sixteen sacks; fifteen on Cassel.  In replacing Tom Brady, Cassel has been coming along.  While he almost never threw for TDs in preseason, he has three since taking over, although he his three interceptions to go along with them.  New England's Tight End's do not account for many yards, but I would never put it past Belichick to try and exploit that weakness in our secondary.  Morris, Faulk and Maroney make a pretty good troika as running backs, and they all seem to get touches in a game, but have only been averaging 113 yards per game. Lamont Jordan is also a great power back, but may see less or no action with his injury, he has not played the last two games.  It's hard to forget the running drive in last years playoffs with a three tight end set that the Chargers were not able to stop.  Just an aside, our defensive line is ranked dead last against the run. 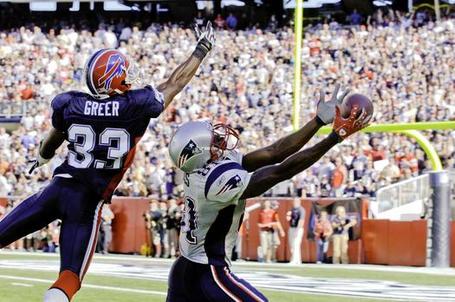 The threats at wide receiver are Wes Welker who tends to get the shorter routes with Randy Moss being the deep threat.  As good as they are, Jabar Gafney makes a credible third target; I would expect to see a fair amount of Cason in coverage this game.  Cassel seems to hit the deep play less often than Brady, and reports say that Moss is looking a bit frustrated.  When he was with Oakland the book on Moss was to hit him hard at the line; I would think that with an aggressive pass rush might disturb the Patriots passing game; and they still look to be a pass first team.  They may modify that with San Diegos weakness against the run; I'm interested to see if Ian Scott will be active this week.

The Patriots front three are giving up 124 rushing yards per game, though that is undoubtedly partly the result of the complete meltdown against Miami.  After last years playoff game Nick Hardwick had some very choice words about DE Richard Seymour's play; watch for extracurricular activity around Seymour.  The Patriots pass defense looks like it should be weaker after the departure of Asante Samuel.  They have picked up Deltha O'Neal; but it doesn't appear that teams have really been able to exploit them so far; they are giving up 175 yards per game.  We all know Rodney Harrison's ability from when he played here, but he too has a lot of seasons under his belt now. New England doesn't get a lot of pressure on quarterbacks, I am hopeful that Rivers will have a good day.

Football Outsider's has the Patriot defense ranked poorly against both the pass and the run, down at 25th overall in the league.  The number two and three wide receiver targets as well as the running backs seem to have the most success.  Their linebackers are quite long in the tooth at this point; I would expect intermediate passes and screens might be able to spring for large gains.  Passes to Sproles and Tolbert out of the backfield could be effective; if they can get Sproles in space I can see him making some long runs.  With Brady out, home field advantage and the Bolts backed up against the wall; this is a real litmus test for the Chargers.  If they can't pull this one out against NE now, you have to wonder if they ever will.