Share All sharing options for: Chargers vs. Dolphins - Offense

The Miami offense went off in their last game against New England. Their game plan of using the 'Wildcat' formation in which the ball is snapped in the shotgun formation to Ronnie Brown while their QB Chad Pennington became a wideout thoroughly flummoxed the Patriot defense. They ran it six times and Ronnie Brown ended up with four rushing TDs and one throwing. While the head coach Sparano is unlikely to achieve the same surprise, there is no doubt he will show some creativity in plays against the Chargers. The Dolphins are coming off a year in which they went 1-15. When they Jets released Chad Pennington after picking up Favre, the Dolphins quickly took him to be their QB. He had been a bit spotty in their first two games, but came on strong against the Patriots, he is currently sporting a QB rating of 88. 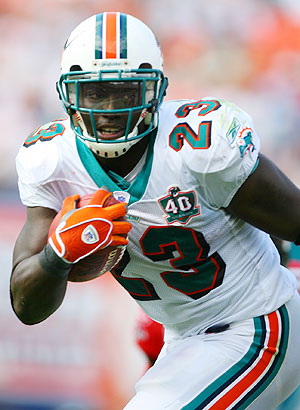 As the result of going 1-15 the Dolphins picked up Jake Long with the first choice of the 2008 draft. Starting at left tackle this year, he was somewhat suspect the first two games, but was a key player in sparking Brown's amazing game against the Patriots. Last year the Dolphins line was abysmal and they worked hard to upgrade it in the offseason. At right guard the Dolphins have Ndukwe who bounced around a few teams before gaining the starting job with the Dolphins and may be exploitable. An interesting note, the entire Dolphin line was nominated for offensive player of the week along with Brown.

At wide receiver the Dolphins have last years pick, Ted Ginn. Ginn, a speedster, was largely considered a reach in the draft last year, this year he has eight receptions for 75 yards. The other wide receiver, Greg Camarillo has 11 catches for 148 yards thus far; this season there are no TDs to either player. The Miami Tight ends have good hands. A. Fasano has 11 catches for 150 yards and two TDs, David Martin has 8 catches for 106 yards and one TD; given the Chargers trouble in covering Tight Ends this could be big trouble for them.

The heart of the Dolphin offense really resides in their two backs. When not smoking the Ganja, Ricky Williams is blasting by linebackers; whether he can keep himself stable for the entire season is an open question. Williams already has three fumbles in this season, so hanging onto the rock is an issue. Ronnie Brown is a terrific power runner as he showed last week, between the two of them they have 300 yards on the season, but Brown has all five TDs. I wouldn't be surprised if he got a majority of the carries against the Chargers.

A quick look at football Outsiders suggests that their running game is actually weaker than their passing, they are picking up a respectable 225 yards per game with three TDs and one interception. Even so their one win was won with their wildcat formation with four TDs coming from the ground game. One advantage the Chargers will obviously have is that they will undoubtedly practice against that and Brown throwing; hopefully they won't overreact.